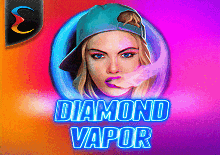 star star star star star 4/5 (818)
Diamond Vapor from Endorphina is a video slot game that could easily be described in such a way, as it takes a very unusual source of inspiration: vaping, or the habit some smokers have developed in recent years to switch from regular tobacco to e-cigarettes, filled with different flavors.

We will not be discussing the health benefits of vaping, if any, here but we will certainly talk about the high variance of Diamond Vapor, the free spins you can win there and what makes the game so cool to play.

Diamond Vapor was clearly designed for modern players who enjoy playing on mobile devices, with a very minimalistic look and tap-friendly menus. The whole game is taking place inside an exclusive vape bar, where only the cool kids go to listen to music and vape their boredom away. The background actually looks like a smoke-filled room with flashing, multicolored lights.

Diamond Vapor is probably unlike any game you have played so far, visually speaking at least. Its unusual theme is giving the Endorphina developers enough freedom to do almost whatever they want to, with the same graphic quality that they have accustomed us to so far.

Try out Diamond Vapor from Endorphina and you will be blown away by the coolness of this game! Try the game now and you will be a step closer to your next win! You will be pleasantly surprised by this game and we promise, that you will come back to play again and again!
Play over 2000 games with 200% bonus +100FS! Deposit