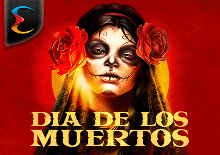 star star star star star 5/5 (995)
Come and take your part in the sacred day of the year when you can be the closest to your ancestors. Dia de Los Muertos slot game is inspired by the Day of the dead â€“ a three-day celebration in Mexico where people share their love and pay the respects to their ancestors.

On the way paved by orange marigolds (which are said to be flowers of the dead), you will find the true meaning of family and discover secrets of the souls, those who come back into this world for just one day â€“ to reward you with some true and heartfelt wins. This must-play slot from Endorphina will take you into mysterious world of centuries-long Mexican traditions.

You can expect the traditional objects and symbols connected with this holiday rolling on the reels so get ready to see a bunch of painted skulls and mariachi and the wickedly beautiful Catrina, the symbol of the Dead.

3 Scatter Symbols (The Mexican landscape) or more appearing randomly anywhere on the reels trigger 20 Free Games. During the Free Games, beautiful Catrina transforms into a Wild symbol. Free games can be won again during the feature and are played at current bet.
Play over 2000 games with 200% bonus +100FS! Deposit