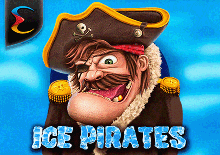 The Ice Pirates slotâ€™s symbols feature piracy theme. The most crucial symbols are a Pirate Captain Symbol, which is Wild, and a Skull Symbol, which is Scatter. So watch for them! Other symbols spotlighted in the game include a Penguin, a Polar Bear, Pirates, a Pirate lady, etc. Players have an opportunity to be awarded 12 Free Games in the slot game.

The Wild Symbol substitutes for any symbol, except for the Scatter Symbol. During the main game, the line wins can be multiplied by special symbols appearing on the reel 5: the pint of beer symbol will multiply the line win x2, wine bottle â€“ x3, poison flask â€“ x5.

3 Scatter Symbols or more appearing randomly anywhere on the reels trigger 12 Free Games. During the Free Games feature, every line win can be multiplied by up to x20.

Try out Ice Pirates from Endorphina and you will be blown away by the coolness of this game! Try the game now and you will be a step closer to your next win!
Play over 2000 games with 200% bonus +100FS! Deposit