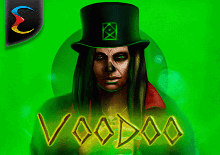 5/5 (848)
Voodoo is a hypnotizing 5-reel, 3 row slot that will take the players on a journey to the mysterious world of Voodoo magic and spells by its supernatural feel and enchanting sounds. This old belief has fascinated people for centuries, not only for its mysterious rituals, but also for the spells and obscure traditions.

In Voodoo meet the mighty Damballa, the serpent God, the Raven, symbol of courage and wisdom, spinning on the reels and throw yourself into a new world of a magical game.

Hold your breath, watch the frightening rituals, and listen to the rhythmic strange chants. The sorcerer makes the strange doll in the shape of human body, sings the thick words and pierces it with the sharp long needles. Itâ€™s voodoo magic!

The most important symbol is a Voodoo man that acts as Wild and Scatter, it substitutes for all symbols and triggers a Free games feature when 3 Scatters appear on the reels, 10 more free games can be won again during the feature. Any symbols at the winning combination will expand to cover the entire reel during the Free games feature.

Try out Voodoo from Endorphina and you will be blown away by the awesomeness of this game!
Play over 2000 games with 200% bonus +100FS! Deposit