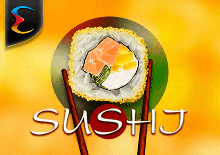 star star star star star 4/5 (691)
Sushi is a video slot themed after everyone’s favorite Japanese food. The slot offers rich graphics, which is the first thing the player gets fascinated by. The traditional Japanese music played during the game is basically meditative and relaxing in character representing natural sounds and the sounds of life. The player will get a feeling of being in his favorite sushi restaurant while playing and waiting for the big wins. Three or more Gold Sushi VIP Cards will unlock 20 Free Games. This Endorphina’s slot is all about sushi, which is a Japanese food consisting of rice combined with other ingredients, such as seafood, vegetables and sometimes tropical fruits. Japanese food lovers often also choose sashimi which is raw sliced fish. Sushi is often served with pickled ginger, wasabi, and soy sauce. The video slot’s symbols feature practically all delicious Japanese cuisine meals mentioned above. The most crucial symbol is Wasabi Shoga, which is Wild only during the Free Games feature, and a Gold Sushi VIP Card Symbol, which is Scatter. 3 Scatter Symbols (Gold Sushi VIP Cards) or more appearing randomly anywhere on the reels trigger 20 Free Games. During the Free Games the Wasabi Shoga Symbol becomes Wild. Free games can be won again during the feature and are played at current bet.
Play over 2000 games with 200% bonus +100FS! Deposit