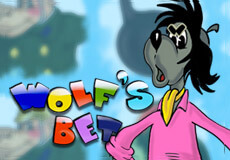 star star star star star 5/5 (249)
Wolfs Bet is a video slot game from BetConstruct inspired by a famous Russian TV cartoon. The series premiered in the late 1960s starring a wolf trying to catch a rabbit, without ever succeeding. While unknown in the rest of the world, the cartoon is as good an excuse as any to create a slot game and give players new ways to win big.

In homage to the original cartoon, Wolfs Bet is designed to look like an old-school TV set instead of an actual slot machine, which is a nice and original touch.

The reels are placed within the TV screen itself, using bright colors and original character designs from the TV show. The command buttons of the TV are on the right side, and you can use them to adjust your bet settings during the game.

Wolfs Bet has an original look that makes it stand out easily on the market. Letâ€™s see if the same can be said about the game play in our next section.

Try out Wolfs Bet from BetConstruct and you will be blown away by the coolness of this game! Try the game now and you will be a step closer to your next win! You will be pleasantly surprised by this game and we promise, that you will come back to play again and again!
Play over 2000 games with 200% bonus +100FS! Deposit