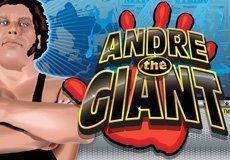 Andre the Giant is a 5 reel, 25 line slot machine inspired by the biggest wrestler in the history of sports-entertainment, AndrÃ© RenÃ© Roussimoff, best known as AndrÃ© the Giant (the huge Frenchman competed in the WWF between 1973 and 1992). If you have ever wondered what it is like to get in the ring with one of the giants of the wrestling world, join Andre the Giant!

Three or more scattered Andre logo symbols launch Battle Bout Bonus. Collect special attack moves during ten free games to enter the ring when the free spins are over. Choose a rival for a fight then select special attacks one after another to defeat him. After three successful attacks appear Andre the Giant Signature Finishing moves. Choose one to finish the fight and to get the additional prize.

At the end of the Battle Bout Bonus feature there is a gamble option that gives you the chance to win double your original prize. You can do this up 5 times.

Play Andre the Giant and Andre will be happy to reward you if you help him to collect his wrestling gear and finish off the opponents.

Your feedback about Microgamings Andre the Giant slot game would help us making Wintika more interesting and useful for our customers, so please rate this game. Your opinion is very valuable to us!