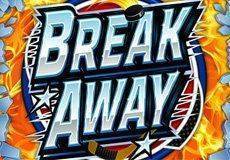 star star star star star 5/5 (466)
Fan of Ice Hockey? Microgaming have developed an amazing hybrid style 5 reel, 243 way slot game themed exactly after this sport. Break Away slot offers 40 wild symbols spinning on the reels and a randomly triggered â€Smashing Wildâ€ feature that can turn up to three reels at once into wilds.

The number of Flaming Pucks you get will determine your initial number of free spins. For instance, 3, 4, or 5 Flaming Pucks will get you 15, 20, or 25 free spins, respectively. You will also be met with multipliers that run from 2X to 10X. The multiplier can effectively increase to 10X whenever you get multiple wins caused by Rolling Reels.

The Random Smashing Wild Feature is a fan favorite, as it always comes with a guaranteed win. This feature is randomly triggered, and it can occur within a spin or at the end of any spin. When triggered, a player might skate his way to the middle of the reels smashing it down, or 2 players might skate and crash in the middle, turning the middle reel into an expanded wild. Only reels 2, 3, and 4 are eligible for the smash!

For players seeking a thrilling and engaging experience with just a touch of on-ice brutality, this is the slot for you!

Your feedback about Microgaming`s Break Away slot game would help us making Wintika more interesting and useful for our customers, so please rate this game or send us your review. Your opinion is very valuable to us!
Play over 2000 games with 200% bonus +100FS! Deposit