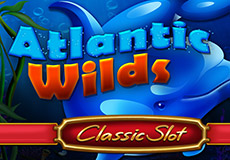 star star star star star 5/5 (658)
Atlantic Wilds, a slot machine by Gamomat, does feature graphics which are inspired by the Atlantic Ocean and its creatures, but it doesnâ€™t have as much of a focus on wilds as the title might suggest. The game is on the simple side overall, but players might still be interested in that, so keep reading and you can find out more about what it offers.

In Atlantic Wilds you will play on 5x3 reels and there will be 10 to 30 active lines, depending on your selected options. The game gives you wilds, scatters and free spins, but this isnâ€™t that great of a feature list, since itâ€™s just so common.

Scatters are even easier to spot, since they show you a Bonus logo in blue letters. You see them on the middle three reels, where they can appear at the same time, to pay you a prize (2x total stake) and to trigger 5 free spins. With additional sets of three scatters, the feature can be retriggered. The biggest advantage of the free spins is that the wild symbols are much more common on the reels, so winning is easier, even though you donâ€™t get a lot of rounds to play through.

Try out the Atlantic Wilds slot game and enjoy the underwater world with the slot creators Gamomat. Good luck in your next win!
Play over 2000 games with 200% bonus +100FS! Deposit