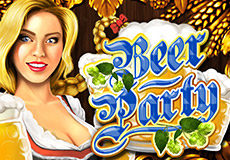 star star star star star 4/5 (759)
With Oktoberfest coming soon, Gamomat is preparing to release a beer themed slot machine, and naturally they thought of the name Beer Party for it. The Bavarian customs, beer, foods and beer maidens are the stars of this game, which looks good enough to do its job, though the graphics arenâ€™t as modern as youâ€™d expect these days.

Beer party is a slot machine with 10 lines for 5x3 reels, where top jackpots of 1,000x appear to be possible. I found only two features inside, and neither is very evolved or interesting, since weâ€™re getting stacked symbols and scatters, nothing else.

Moving on to the scatter, itâ€™s the Beer symbol which gets the honor, showing us a mug of foamy blonde liquid. The symbol will offer you rewards, based on how many times it appears on the reels. As a scatter symbol, it does away with the requirement to create winning combinations on specific lines. You only need the stacked scatters to appear and have at least 3 symbols visible in a single round.

Try out the Beer Party slot and feel the vibes of Oktoberfest during any time of the year. Cheers and good luck in your next win!
Play over 2000 games with 200% bonus +100FS! Deposit