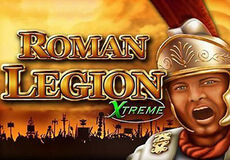 star star star star star 4/5 (462)
Before the eventual collapse of the Roman empire in the 5th century, their superbly trained armies had won battles and territory in Europe, Central Asia and North Africa for 500 years; Roman Legion Extreme is an online slot which reflects their history and glory, itâ€™s developed by Gamomat and you can read all about it here.

Roman Legion Extreme is a five-reel slot with three rows and five paylines; however, as you can see from the screenshot above thereâ€™s a main set of reels and then a longer set on the right. The right-hand side set is essentially three sets on top of one another and there is no connection between the right and left sets, except when collecting scatter icons.

Various Roman symbols represent the higher value symbols and these include the standards or various legions such as the famous golden eagle and a stack of gold coins; 9, 10, J, Q, K and A make up the lower values. The warlike legionary is the wild symbol and he will substitute for all others to make a winning combo except for soldier on horseback scatter.

Try out Roman Legion Extreme and explore the world of exciting games! This game will definitely open your favorite games list. Start playing this game on our website and get all the bonuses and free spins that you can get to win more!
Play over 2000 games with 200% bonus +100FS! Deposit