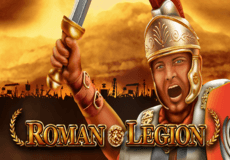 star star star star star 4/5 (401)
Before the final curtain fell on the Roman Empire after some 500 years of military expansion the Roman Legions were the worldâ€™s great fighting force so of course they deserve the tribute of an online slot machine in their honour; Roman Legion is the one we have here, itâ€™s developed by Gamomat and you can find out how it works below.

Roman Legion is a five-reel slot with three rows and five fixed paylines; golden frames constrain those reels while in the background the massed standards of the legion can be seen silhouetted beneath a smoky sunset sky.

The higher value symbols used here include the red standard, the golden eagle and a couple of Roman coins; 9, 10, J, Q, K and A represent the lower values. The wild symbol is the shouting soldier and it will replace all others to help form winning combinations except for the soldier on the back of the rearing horse â€“ thatâ€™s the scatter icon.

Try out Roman Legion and explore the world of exciting games! This game will definitely open your favorite games list. Start playing this game on our website and get all the bonuses and free spins that you can get to win more!
Play over 2000 games with 200% bonus +100FS! Deposit