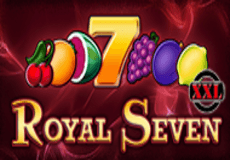 star star star star star 5/5 (423)
Royal Seven XXL RHFP is brought to you by Gamomat. A lesser known developer of online slots, Gamomat do not always tend to incorporate free spins, multiplying bonuses or hidden gems. Purples and golds provide the link to the Royalty in the name as the game itself boasts warm colors and courtly excitement. The added Red Hot Firepot a special feature thatâ€™s seen across a number of slots from Gamomat, and it gives you the chance to enter a jackpot side game with each spin.

As a basic online casino game, the retro Royal Seven XXL RHFP video slot has limited features. Win symbols are fundamentals in the slot world. Cherries, lemons, oranges, plums, grapes and watermelons with the addition of the powerful royal seven are all used as symbols and appear stacked on the reels. The golden seven set magnificently against its purple background is by far the most valuable symbol, worth up to 1,000 coins for five across the reels. Wild symbols do not appear in Royal Seven XXL but the fruits are stacked which makes a win more likely as they land on the win lines.

Try out Royal Seven XXL RHFP and explore the world of exciting games! This game will definitely open your favorite games list. Start playing this game on our website and get all the bonuses and free spins that you can get to win more!
Play over 2000 games with 200% bonus +100FS! Deposit