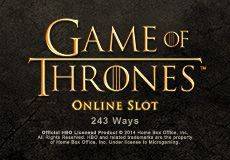 star star star star star 4/5 (902)
Based on the best-selling book series â€œA Song of Ice and Fire,â€ by George R.R. Martin, Game of ThronesSM follows kings and queens, knights and renegades, liars and noblemen as they vie for power and a chance to sit on the Iron Throne of Westeros. The series made its debut on HBO in 2011.
Play over 2000 games with 200% bonus +100FS! Deposit