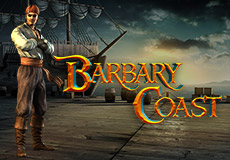 star star star star star 4/5 (378)
Discover a world of dangerous swashbucklers, and a deep dark mystery buried far beneath the waves! This is the Barbary Coast, the playground of ruthless pirates who will stop at nothing to get their hands on fabled treasure, sultry maidens, and a path of pillage and plunder. Join forces with the dashing captain Benjamin Sawyer as he hunts adventure and riches on the high seas. Of course a pirates life is not all sword fighting... Will you find the golden jewels before Blackbeards band of scallywags? Come aboard for this explosive, exciting voyage to the Barbary Coast.

â€¢ Cannon Wild Reel
Receive the CANNON symbol in the middle of the center reel to trigger the wild reel feature! This reel substitutes all icons except PARROT, BEN SAWYER, WORKER, and CAPTAIN BLACKBEARD. Wild reel holds over to the following spin which is paid!

â€¢ Sword Fight Bonus
Three CAPTAIN BLACKBEARD symbols on any active payline triggers the fight bonus! This symbol appears only on 3, 4, 5 reels. Take on the mighty Captain Blackbeard in a sword fight to earn instant credits and rescue the beautiful maiden that has been taken from you!

â€¢ Grog Challenge
Three WORKER symbols on any active payline triggers the Grog Challenge bonus round! Challenge the worker to a pirate drink off and prove your mighty drinking prowess! This symbol appears only on 1, 2, 3 reels.
Play over 2000 games with 200% bonus +100FS! Deposit