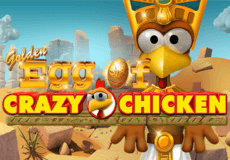 5/5 (653)
Have you ever spent sleepless nights wondering what ancient Egypt would have been like if it had been run by chickens? No, neither have we, but the answer is perhaps revealed in the Golden Egg of Crazy Chicken video slot from Gamomat.

The comedic symbols in Golden Egg of Crazy Chicken include classics from ancient Egyptian-themed slot games, such as the all-seeing Eye and the crook and staff, mixed in with chickens dressed as a pharaoh. Each of the reels has a stone effect, and we get a glimpse of a desert landscape dotted with ancient temples peeking out from behind them. Itâ€™s a pity that the soundtrack doesnâ€™t match the impressive visuals, as all we have got to listen to is a series of beeps and buzzes as the reels spin.

Players should be able to feather their nests with coins by landing matching symbols across a payline from left to right. The Golden Egg of Crazy Chicken video slot has a high return-to-player percentage, and like all games from Gamomat, itâ€™s been independently certified for fair play. You wonâ€™t need to shell out much to get started either, as the minimum stake is just 0.05 per spin. Enough of the bad jokes! Itâ€™s time to crack open this slot game and see whatâ€™s waiting for us inside.

Try out Golden Egg of Crazy Chicken and explore the world of exciting games! This game will definitely open your favorite games list. Start playing this game on our website and get all the bonuses and free spins that you can get to win more!
Play and win for real with welcome bonus! Deposit